Extracts from a magazine produced by St Columba's Church in London have provided an insight into the mood of the day after King George VI died in 1952 and his daughter's accession to the throne.

Elder Susan Pym collated the information as part of the congregation's activities to mark Her Majesty the Queen's Platinum Jubilee after 70 years of public service.

The magazine published a statement issued by Buckingham Palace on the 6th February 1952.

It read: "The King who retired to his rest last night in his usual health passed away in the early hours of this morning."

The following Sunday, a large congregation gathered in the Great Hall of Imperial Institute (Imperial College) on account of the "new" St Columba's Church on Pont Street still being under construction.

Addressing the congregation, minister Rev Dr Robin Scott said: "No chance to look his last upon wife and family summoned to his bed-side; no chance to express last wishes or speak last chosen words.

"Seldom in our history can there have been anything comparable to the wave of sorrow that swept over the whole world on the sudden and unexpected news of the death of His Majesty, King George VI.

"It was a sorrow not alone for the loss of the head of a great Nation and Commonwealth but a personal sorrow for the loss to the world of a good man, a man who used every influence of his exalted station only for what was right and good and true.

"It was this that sent people in their thousands to the Churches on Sunday 10th February. They were paying tribute to goodness and goodness is of God."

Prayers were offered for the King and Dr Scott also prayed for the new, young Queen.

"Almighty and most merciful Father, we beseech Thee for Her Majesty Queen Elizabeth, that Thou would comfort her in her sorrow; sustain and strengthen her for the manifold duties that now come upon her and spare her to long reign over us," he said.

"Grant her all her days the knowledge of her peoples' love and loyalty; keep her in the faith and footsteps of her father and in Thy love and favour, that her rule being blessed of Thee may be a blessing to all, through Jesus Christ Our Lord."

George, the young Prince Albert, was not set apart from his earliest years or schooled and trained for becoming King.

Dr Scott noted that he was reluctant, shy and diffident but when the moment came he was ready.

The minister's words then turned to the young Queen Elizabeth, only 25 years old, and her sudden summons to the throne.

"No one could forget, he said, the image of that lonely figure standing at the door of the aeroplane, brought back from the happiness of her tour of Kenya with Prince Philip, her grace and dignity as the world watched," he said.

"No one could fail to be deeply moved by the strong and solemn and sincere words of her own declaration on her Accession to the Throne.

The magazine reported the Queen's words.

"My heart is too full for me to say more to you today than that I shall always work as my father did throughout his reign, to uphold constitutional government and to advance the happiness and prosperity of my peoples spread as they are all the world over.

"I know that in my resolve to follow his shining example of service and devotion I shall be inspired by the loyalty and affection of those whose Queen I have been called to be and by the counsel of their elected Parliaments.

"I pray that God will help me to discharge worthily this heavy task that has been laid upon me so early in my life."

The 31st of May 1953 was the Sunday before the Coronation and Anointing of the Queen who had asked all Churches to pray for her and to remember her before God.

Addressing the congregation, Dr Scott said: "The Moderator of the General Assembly of the Church of Scotland will, with his own hands, give to the Queen a copy of the Holy Bible."

In December, 2015, the Queen and her late husband Prince Phillip visited St Columba's Church for a service of thanksgiving and attended a reception to celebrate the 60th anniversary of the re-dedication of the building.

The original church of 1884 was destroyed in May 1941 during wartime bombing and it was rebuilt on the same site with a new, modern design. 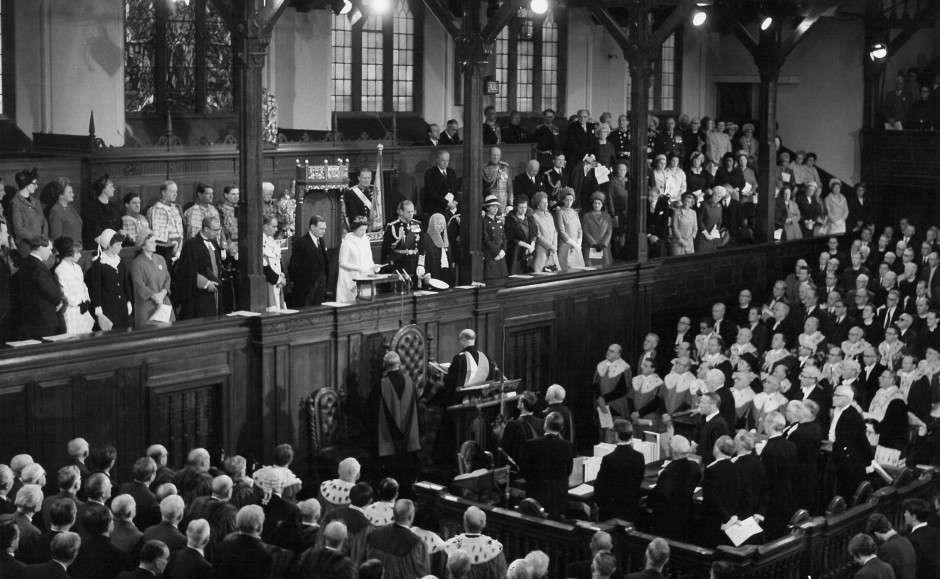